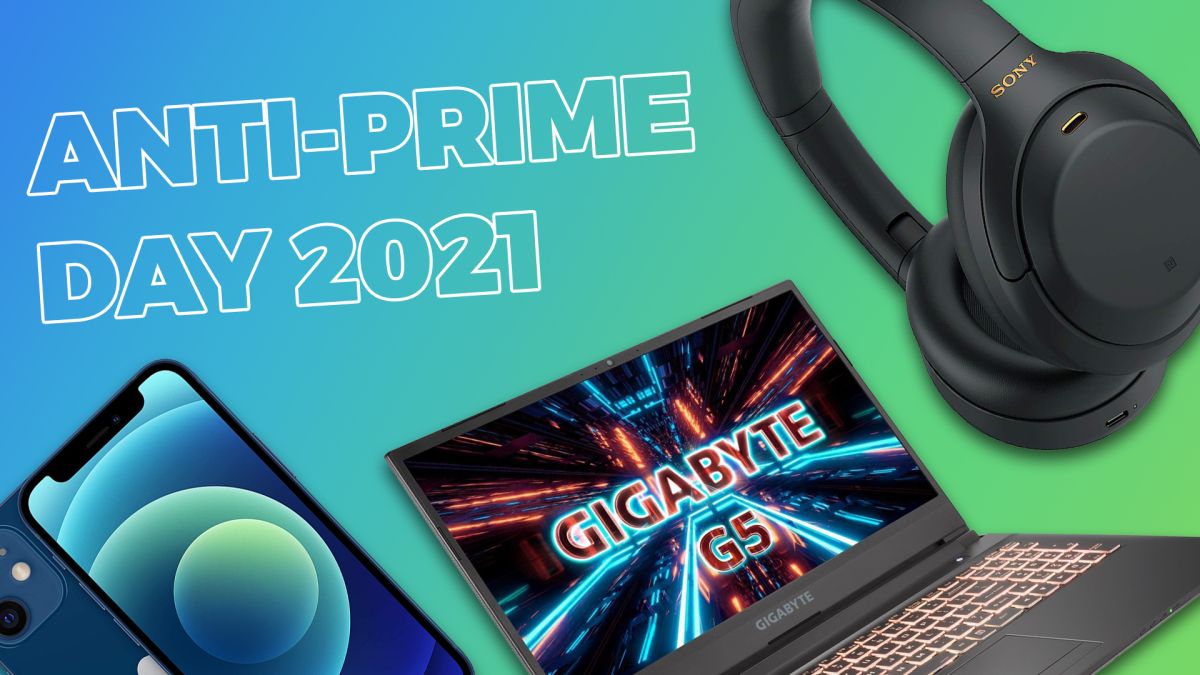 Prime Day is here, but you shouldn’t limit your search to only Amazon for a good deal over these days. Keep your eyes peeled, as other retailers are crashing the party.

It’s like clockwork every year. Here in the UK, once Prime Day starts, Currys PC World starts an epic deals event; John Lewis promotes some big gadget discounts; Game cuts the price of some (yep, you guessed it) games, and you’ll see the likes of Box, Laptops Direct and Dell come out of the woodwork with offers of their own.

Put simply, retailers are playing a game of chicken with Amazon to see whether they can get a better price and get one over on the company, which makes it the best time for you to buy gadgets, like laptops, phones, monitors and more.

What are the best anti-Prime Day deals?

Any Prime Day deal that you see, I recommend searching for that same product elsewhere. That way you can be 100% sure that the price you’re getting on Amazon is the lowest. In fact, get the CamelCamelCamel Chrome extension, which does the hard work for you.

But for now, we’re already seeing some movements from the key retailers that are taking the fight to Amazon with decent deals across laptops, gaming and portable audio.

Sony WH-1000XM4 headphones: was £349 now £299 @ Currys PC World
We love these so much we gave them the highly coveted Editor’s Choice award in our Sony WH-1000XM4 review. And for good reasons — excellent audio quality, powerful active noise cancellation, long 30-hour battery life, and a lightweight, comfortable frame. Don’t miss this rare saving on the cream of the headphone crop.View Deal

LG Gram 14: was £1,149 now £769 @ Currys PC World
Need a powerful ultrabook ready for the big return to the working world? The LG Gram is a beast with 11th gen Intel Core i5 performance, a gorgeous 1200p display, 8GB RAM and 256GB storage — all crammed into a laptop that weighs just a kilogram and measures in at a mere 16mm thin.View Deal

Nintendo Switch Lite & Animal Crossing: New Horizons Bundle: was £219, now £199 @ Currys PC World
The Switch Lite price cuts are back, just in time for all the incredible Nintendo E3 announcements set to release this year. Not just that, you will also get Animal Crossing: Hew Horizons included, which is one of the most wholesome, chilled experiences I’ve ever had!View Deal

Acer Swift 5: was £999, now £799 @ Currys PC World
With a massive £200 off, this Acer Swift 5 with 11th Gen Intel Core i5 is an unbelievably good laptop deal. The FHD display up top is fully touch enabled, multitasking is handled by 8GB DDR4 RAM and you can stuff this full of stuff on the 512GB SSD. View Deal

Asus Vivobook 14-inch: was £649, now £579 @ Currys PC World
On the lookout for a system with enough horsepower for your day to day? The Asus Vivobook will do you good with 10th gen Intel Core i5, 8GB RAM and a 512GB SSD — made even better with a £70 discount!View Deal

Acer ZenBook: was £699, now £479 @ Currys PC World
This is a great all-rounder for work and play with a 10th gen Intel Core i3, 8GB RAM, a 256GB SSD and 14-inch FHD display — stuffed into a slim, attractive chassis. But with £220 off, this becomes one of the cheapest power-to-price ratio’d laptops you can get right now!

Acer 715 Chromebook with free travel case: was £399, now £329 @ Currys PC World
Chromebooks already offer great value for money, but to see an extra £70 off the 15-inch 715 with a free travel case is bonkers. You get everything you need ready for working on the go, when restrictions finally lift!

Lenovo Series 3 gaming laptop: was £699, now £599 @ Currys PC World
Looking to dip your toes into laptop gaming for the first time, without paying through the nose for the pleasure? Get £100 off the capable Lenovo Series 3, which features a 10th gen Intel Core i5 CPU, GTX 1650 GPU, 8GB DDR4 RAM and a 256GB SSD, alongside a full HD screen with 120Hz refresh rate.View Deal

Lenovo Tab M10: was £149, now £99 @ Currys PC World
Need a tablet quickly on-the-cheap? Get £50 off the Lenovo Tab M10 — a powerful Android tablet with features a MediaTek Octa Core processor, a gorgeous 10.3-inch FHD+ display and a beefy battery to last a long while for your binging needs between charges.View Deal

Google Nest Mini: was £49, now £10 when you spend £100 or more @ Currys PC World
Spending more than £100 at Currys PC World? Just use the code NESTMINI10 at checkout and get a Google Nest Mini for just a tenner! The building block for any smart home, this is a cheap and cheerful smart assistant that can do it all.View Deal

HP Pavilion 13: was £849.99 now £699.99 @ John Lewis
The HP Pavilion is a capable laptop with plenty of power under the hood of its stylish design. In this configuration, you’ll find a powerful 10th gen Intel Core i7 CPU, 8GB of DDR4 RAM and a 512GB NVMe SSD, alongside that gorgeous 13.3-inch FHD display.View Deal

Sep 17, 2021 zaphfrans
We use cookies on our website to give you the most relevant experience by remembering your preferences and repeat visits. By clicking “Accept”, you consent to the use of ALL the cookies.
Cookie settingsACCEPT
Manage consent