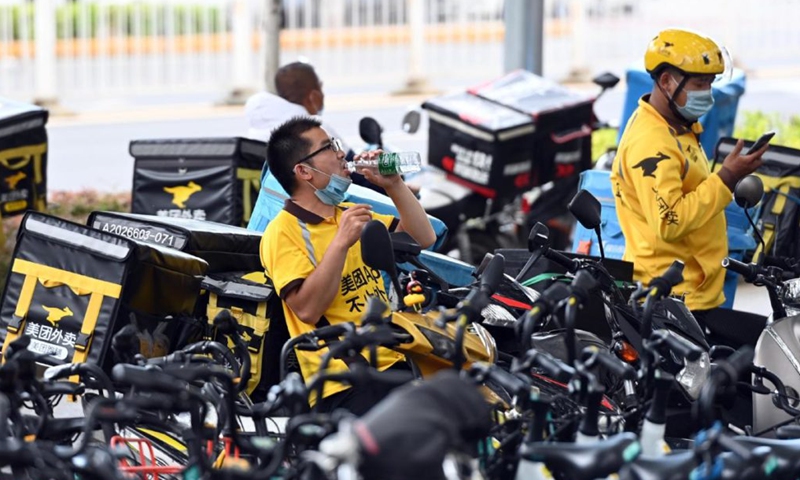 Meituan deliverymen take a break along a road in Beijing on Tuesday. Shares of the Beijing-based food delivery giant ended up 10.41 percent in the Hong Kong market on Tuesday, making it the country’s third-largest internet firm by market capitalization, following Alibaba and Tencent. Photo: cnsphoto

Four Chinese government departments including the Ministry of Human Resources and Social Security (MOHRSS) on Friday gave joint administrative guidance to 10 top platform firms including Meituan, Didi, Alibaba and Tencent over labor rights and interests, in a fresh move to urge compliance with tougher regulations of the sprawling platform economy.

MOHRSS, together with the State Administration for Market Regulation, the transport ministry, and the national federation of trade unions met on Friday, in which a joint administrative guidance was given to 10 top platform firms as regards safeguarding the rights and interests of labor employed in new business models, read a statement on MOHRSS’ website.

The Friday meeting said that the problem of labor rights protection is urgent, and it urged the platforms to protect labor, including optimizing platform algorithm rules, income distribution, rest, labor safety and health system.

The platforms should improve political awareness, the meeting said.

As the platform economy rapidly develops, the number of workers engaged in new forms of employment, such as online car-hailing drivers and internet marketing specialists, has increased considerably. But these workers face new situations and problems in protecting their rights and interests.

The meeting was considered to have amplified a call for improved employee wellbeing after the announcement of new guidelines in July, which envisions an income distribution mechanism that aligns with workers’ assignments and work intensity to ensure that delivery workers’ normal pay is not lower than the local minimum wage.

The platforms were also banned from using algorithms that provide the harshest performance reviews of the delivery staffers. They were ordered to get the median of the algorithms while setting reasonable evaluation criteria including order numbers, punctuality and availability, as well as to relax time limits for food delivery, based on the July rules.

In yet another sign, the Beijing general labor union recently unveiled an implementation plan to push for trade unions among companies known for their expertise in new business models.

Some internet behemoths have already moved to promote trade unions with their employees. For instance, Beijing-based online retailer JD.com hosted the inaugural meeting of its trade union members in late August.

Such efforts are seen as part of a national drive to put platform firms and their staff on equal footing, with improved working conditions and enhanced protection of employees’ rights, thereby laying the groundwork for the common prosperity goal to materialize.

Meituan vowed at the Friday meeting to take the lead in responding to the national push for implementing riders’ occupational injury insurance and protection and improving their social security, among wide-ranging measures to boost workplace wellbeing.

Sep 17, 2021 zaphfrans
We use cookies on our website to give you the most relevant experience by remembering your preferences and repeat visits. By clicking “Accept”, you consent to the use of ALL the cookies.
Cookie settingsACCEPT
Manage consent